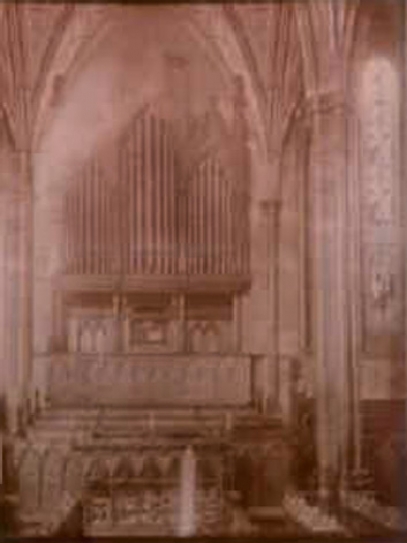 State of preservation: Modernisation 1729 by Christopher Schrider („Echo“ changed to Swell; Violl and Violin replaced by Crumhorn, cal’d Cremona Stop of mettle); in 1843 removal of the organ gallery and replacement of the organ, in addition enhancement of manuals, additon of pedal and couplers; further renovation 1910; destructed by air raid 1941.

In 1954 new organ by Harrison & Harrison in a replica of Smith's organ, with mute front pipes.

Smith's was the victorious one of the famous „Battle of the organs.“ The three-manual design without pedal set an example for english organs, and so the instrument received pedal and couplers only in mid 19th century when playing foreign organ music gained popularity in England too. A special feature was the use of split upper keys showing how long mean tone temperament was considered essential.

The sound ideas of Father Smith based on his native north and central german traditions implanted a series of stop names hardly anglicised, like Hohlflute or Spitss Flute, quite appealing too for some organists' senses of humour. Christopher Schrider's modernisations witness the slowly changing musical ideas after 1700; the rather newly invented swell meant to enforce the echo effect of the third manual, the exchange of the probable strings stop by a french-style reed showed just how much these sounds were cherished in England. One century later an exchange like that would have been done the other way round almost anywhere in Europe.