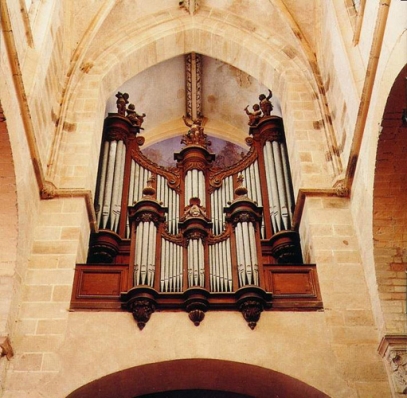 State of preservation: The instrument had been unaltered for a rather long time. Retuned in 1889, electric blowers in 1960; restored by  Philippe Hartmann in 1963, in 1977 reconstruction of traditional bellows.

Since the archive of Souvigny priory had been destroyed in 1793, informations about the building of the instrument were lost. Only during restoration in 1963 inscriptions on wind chests by François Henri Clicquot confirmed what had been assumed since the 19th century about the organ being a typical and remarkable Clicquot instrument.
The sound composition of this instrument can be considered representative for the "classical style" of the Clicquot workshop, also considered a model for the qualities of French organ building outside France. But it also should be mentioned that some organ literature from outside France can not be played on such instruments. Especially the pedal with two pairs of trumpet and flute stops determines a solo function not enabling any powerful sound fundament required in the organ music of many neighbouring countries. On the other hand, the widespread unity of this French organ style (with the exceptions of some border regions) simplified the realisation of organ literature of France and offered a basis for composers to proscribe specific registrations because it was guaranteed that specific colours were present in every French organ.