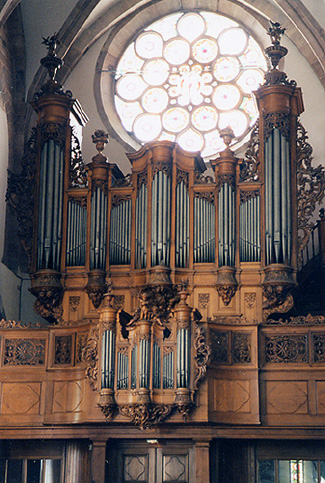 State of preservation: 17 stops and wind chests by  Silbermann. The organ was cared for by the Silbermann workshop from 1750 to 1778; in 1778 Mozart played it while in Straßburg. Some modifications between 1790 and 1860. On an intervention by Albert Schweitzer in 1908  a replacement of key action could be prevented and a first attempt at „restoration“ by Dalstein-Haerpfer followed; in 1909 Schweitzer played his first concert with organ works by Bach on this organ. In 1927, 1938 and 1956 further modernisations of stops and an electric key action which were partly reversed during a restoration of the state when it was built, with some compromises regarding the echo, by Alfred Kern & Sohn in 1979.

As opposed to eg Schnitger Johann Andreas Silbermann followed the principle not to use any older pipe material in his new organs. His organ, of the mightiest impression for Albert Schweitzer's organ art, was nonetheless not spared any modernisations deteriorating the original sound. The echo division became the focal point of romantic sound ideas in France, and therefore contains hardly any more Silbermann material here.