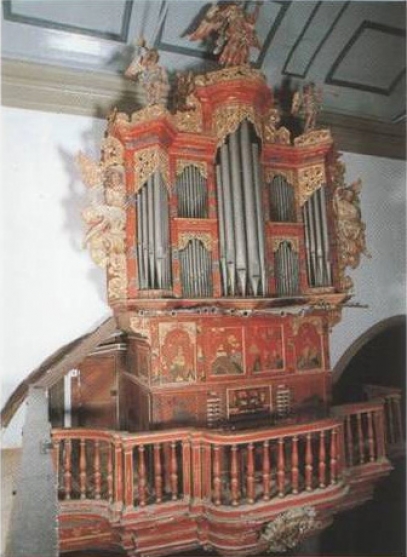 The main port of the Algarve  obviously had intensive international trade relations; so the presence of an organ from northern Germany in Faro cathedral is less surprising than it might appear on first sight.

In 1964 Gustav Fock had researched, that Arp Schnitger had delivered two organs of 12 stops on 2 manuals each to Portugal in 1701, showing close links of Schnitger's workshop to Portugal. The organ in Faro was built by Schnitger's journeyman Johann Heinrich Hullenkamp, recorded in two contracts of  1715/16, obviously using materials from the home workshop. Hullenkamp had been working in the franciscan abbey in Lisbon in 1711 and the carmel in 1722.

During the restoration of the organ in Mariana (Brasil), it had been thoroughly compared with the instrument in Faro, with interesting results:

• Both organs have been built by the same maker
• The Mariana organ has not been changed, and had approximately the same size as Faro.
Even after Olovini the Faro instrument shows Hullenkamp's concept.