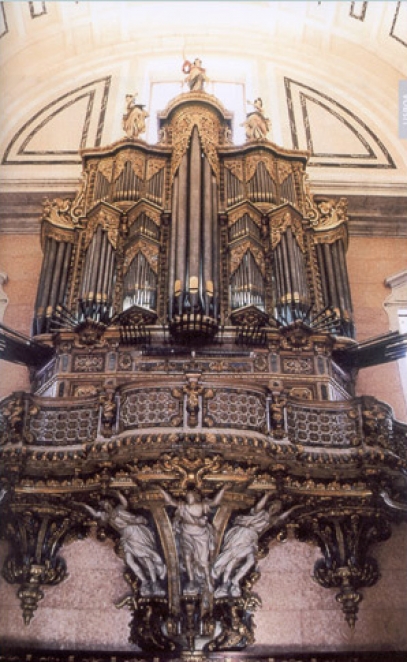 The organ of Lisbon, São Vicente de Fora most clearly represents the individual Portuguese organ with its specific differences to neighbouring Spain. The design of the case already shows neoclassicist elements, a big central tower with the biggest pipes  (contras de 24 palmos) rising above the reed battery. For a long time it was assumed to be made by Machado e Cerveira although it contains some stops not typical for him; in the meantime João Fontanes de Maqueixa is considered more likely.

Like in Spain the keyboards (and sliders) of organs in Portugal are consequently divided into a treble and a bass half, with some stops continuing over the gap (like here: Flautado de 24, Flautado de 12 or Cimbala 4f.), some others only in treble or only in the bass (compare treble: Flauta traversa, Flauta doce, Vox humana; bass: Contras de 24, Vintedozena 2-3f). Some of these complement each other, others are isolated and have no counterpart (like Flautado napolitana in Echo). The pitches of the stops also resemble those in Spain, usually measured in „Palmos" (spans [full span]). 24 Palmos resembling 16'.