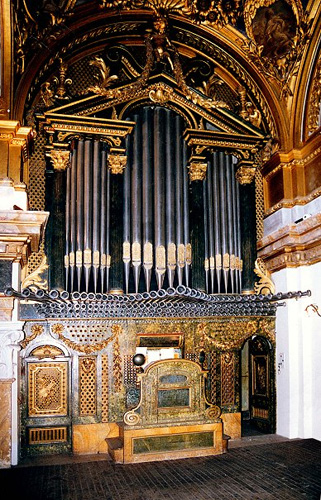 State of preservation: Restored in 1993 by Gerhard Grenzing.

In 1755 King Fernando VI had an organ planned for the new Royal palace in Madrid, and  Leonardo Fernández Dávila negotiated with the architect  J. B. Sacchetti about the proper position of the instrument, Because of the slow progress Dávila, advised by Antonio Soler, started building the instrument only in 1771 but due to illness could not finish the organ. So he recommended his pupil Jorge Bosch who had to complete several other orders and could finish the organ only in 1780.

A peculiarity of this fairly big instrument of 42 stops are the two swells, the upper division as well as the positive organ being completely enclosed and without a visible façade but moving doors for dynamic effects. To keep the action as simple as possible the main organ is played from manual III, the top division behind from manual II and the posititve from manual I.