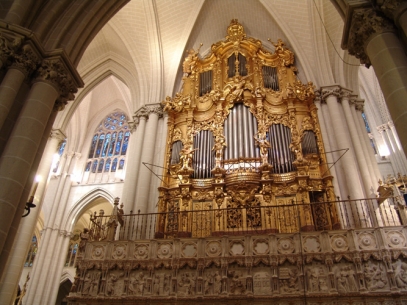 Toledo cathedral received two choir organs after 1750: first the Epistle organ on the southern side of the Coro by Pedro de Liborno Echevarría, in a case by  German López, with its remarkable inscription „non plus ultra“ („not further beyond“), quoting the motto of emperor Charles V (Carlos I of Spain) "plus ultra" but also a cant on the opposite organ above the southern entrance, the famous "El Emperador" built by Juan Gaytan in 1543.

At the northern side of the Coro the brothers José and Valentín Verdalongo built the Gospel organ, which, in comparison, reveals some modern elements of the time around 1800.

2 couplers manuals, 2 Tremulants for I and II each; one for III