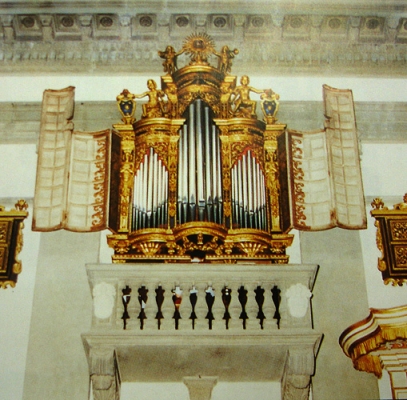 State of preservation: Restored in1995 by Riccardo Lorenzini

Did the dutch organ maker Willem Hermans produce a "Dutch" or an "Italian" organ in Pistoia?

Its façade is unmistakably dutch in style with its three round towers and matching wings, detached central tower and typical cornices. The basic concept of the organ is unmistably italian with its one manual and attached pedal, the stops though show many dutch elements, like several reed stops (including a "Voce umana" reed!), a cymbal of three ranks without its name, a 1' flute in the bass, a compond cornetto in french style based on separate "Flauto" 8', and a division italian in idea but dutch in limits. Some essential italian stops are missing, like the 4' flute or the undulating diapason "Voce umana" which might find a substitute effect in the tremolo.

Compared to the uniformities in sounds and styles of italian organs, the Pistoia organ is definitely "foreign" not the least because it was not imitated elsewhere. Nonetheless some elements reappeared in the big organs of the Casparini (for example in the Trient/Trento cathedral) to migrate to the monumental organs of Salzburg or Görlitz and leave its marks in the southern German or Old Austrian organ styles.