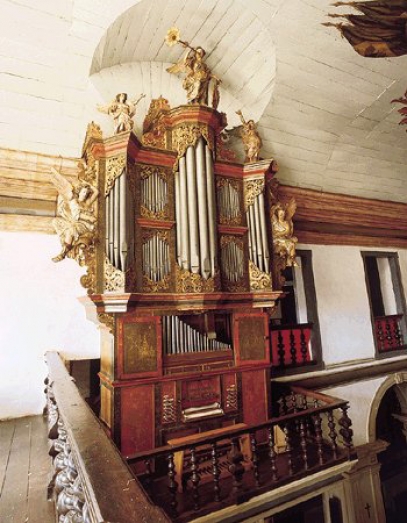 The old parish church in Mariana was built in 1704 following a pattern common for jesuit churches. A papal bull of 1745 established the diocesis of Mariana and the church was risen to the rank of cathedral. An organ by Arp Schnitger was acquired in Lisbon in 1752´which was erected on its own gallery.

The history of the Mariana organ could only be established in closer detail in the 20th century. Obviously Schnitger's journeyman  Hulencamp (Hulencampo) installed the organ in 1711 in the Fransciscan abbey in Lisbon. This organ was acquired by Father José de Oliveira from the organ maker Joâo da Cunha for Mariana. It was disestablished, packed in 18 crates and sent to Brasil by ship. With it detailed instructions for reestablishment, since the organ maker did not travel with the instrument. There is an angel statue on the orgaan case bearing the coat of arms of the Franciscan order revealing its first destination.

1974 the organ had this specification:

Considering the specification the organ has been remodeled several times. In1978 it was restored by Beckerath, in 2001 by Bernhardt Edskes.