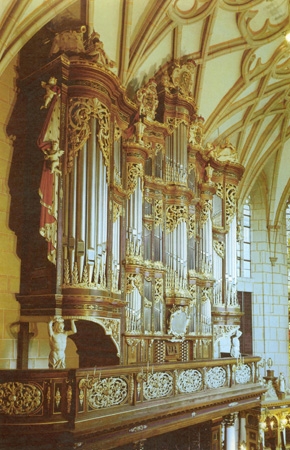 State of preservation: Case, parts of technical construction (Wind chests, pedal action, bellows) and majority of pipes by Trost; after severe remodeling 1867 and 1881 and requisition of front pipes 1917 reconstructed 1974-1976.

This organ was rated a masterwork already in the 18th century. During his years in Weimar Franz Liszt played it regularly and valued it highly, thus giving an example to posterity about the potential of this baroque organ for the interpretation of his own romantic organ compositions. Later generation felt a necessity to "romanticise" this instruments by modifications removed again during reconstruction 1974/76.