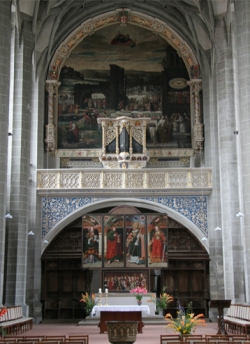 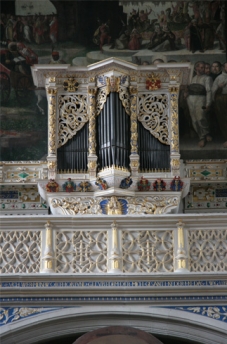 The Reichel organ is an important monument of central German organ making after the devastations of the 30 years' war. Therefore the instrument is still rather small in comparison of the more representative organs of later decades. The massive and decorative case, however, reveals its high value at the time.

The specific importance of this instrument lies in its links with its famous organists the young Georg Friedrich Händel probably has been educated on this instrument by his teacher Zachow; since organs played by Händel are hardly preserved neither in Germany nor in England this document of his personal world of sound is of extraordinary importance. Some decades later the instrument was regularly played by the oldest son of Johann Sebastian Bach, Wilhelm Friedemann Bach, estimated by his contemporaries as the greatest organ player of the Bach family, while he was organist in Halle, his reputation superceding his father's, immortalised in numerous organ works his father composed for him.