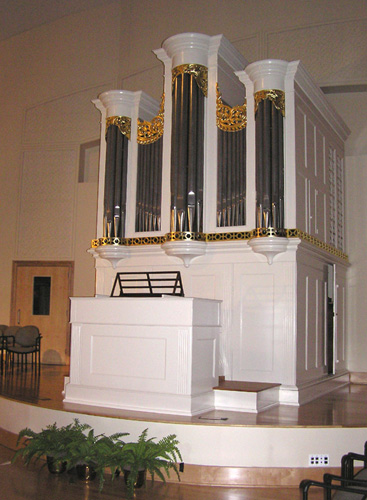 State of preservation: Repairs 1845 and 1870 using spares of a Tannenberg organ of 1798. 1910 out of use and put in storage, in 1960 a number of pipes was squeezed flat by adolescents. In 1998 the organ was put together again in preparation of a restoration, done in 2003/4 byTaylor and Boody according to the state of 1800, and transfered to the visitors' center in Old Salem.

After Tannenberg had delivered a smaller organ to Salem in 1798 the Moravian Brothers contracted him for a rather big organ with two manuals and pedal for the Home Moravian Church in Salem. Tannenberg made the instrument in his workshop in Lititz (PA), but could no longer install it himself due to his advanced age of 72. So he sent his journeyman (and later successor) Johann Philipp Bachmann, like Tannenberg originally of Herrnhut.