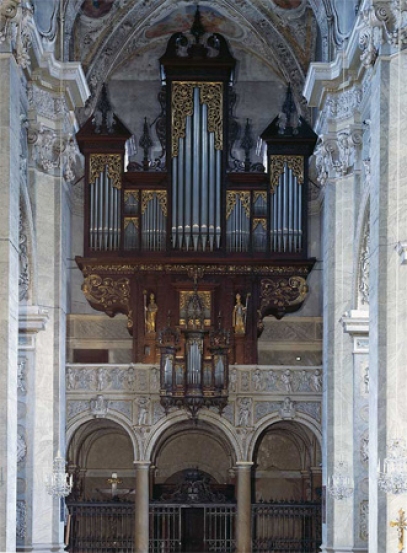 State of preservation: The original wings probably got lost in the 18th century. During a planned restoration in 1941 the pipes were stored in the church towers while the action was transported to the Kunsthistorisches Museum in Vienna where it was destroyed in the war.  A first post-war reconstruction in 1948 was followed by a restoration in 1983-85 and 1989/90 with a reconstruction of the original action and the reed stops (following the original Regal stop) by Kuhn (Männedorf).

Johann Freundt's festival organ, ever played only at high festivals, was built in a period when the 30 years' war devastated vast regions elsewhere and many organs were destroyed. It represents like few others the changes from Renaissance to Baroque organ styles. The case, with pipes still in line, as well as the breast positive with Regal 8' as fundament still follow older patterns while the parapet positive as well as many decorative elements take more modern forms. The organ always was admired for containing only metal pipes which were praised for their quality. The reason now revealed is a fairly high content of trace elements (about 1 % bismuth and copper) with the 12 to 14 Lot alloys and the above average thicknesses of the pipe walls.