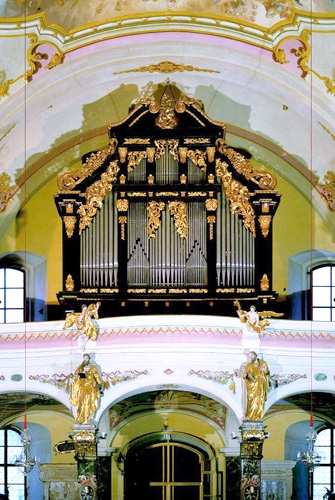 State of preservation: The instrument initially was built for  Mariazell abbey, including a Principalbass 16’ of the previous organ. In the 19th century the instrument got a detached console, removed again during restoration.

The instrument symbolised the particular stylistic developments of the Egedacher workshop, forming models followed by many later organ builders in Bavaria and Austria.  Main organ and positive (here on top) hardly contrast but correspond with another in dynamic graduation. The fundamental stops of 8’ and 4’ offer open diapason and stopped/flute variants, in further consequence to be enhanced with additional colour stops.

* The second stop for Principal 8’ (HW) activated a transposing action (now out of action) to sound the stop a major second lower in chamber pitch, as a technical solution for playing together with chamber pitch orchestral instruments in the 18th century.