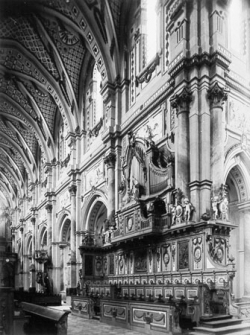 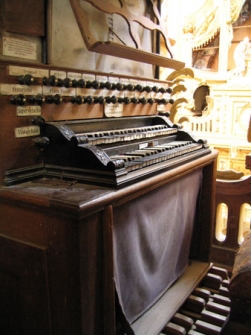 State of preservation: Up to1902 several repairs; 1954 restoration by Steinmeyer, including a rank Fagott 16' in the smaller of the organs

Ebrach abbey obviously had two choir organs in the 16th century, placed above the choir stalls in 1535.  On order of abbott Leonhard Rosa the organ maker Mathias Eckstein of Heidingsfeld built a bigger organ and a positve organ which were both severely damaged in the 30 years' war but still present in 1660/1661 but were replaced 1669 to 1671.
In the 18th century all the organs within the church were planned anew, starting in 1742 with a new organ on the western gallery by Johann Philipp Seuffert, some of the tin for organ pipes contributed by monks offering their drinking cups. In 1753 an organ of two manuals and in 1759 another of one manual was again installed above the choir stalls.

After the dissolution of the monastery in 1803 the church was used for the parish, and attempts were made to keep at least one of the choir organs in working order by regular repairs as documented in the years 1825, 1834, 1857, 1873/75 and 1881 bezeugen. In 1902 G. F. Steinmeyer of Oettingen built a new instrument in the case of the great (western) organ although obviously using the majority of the old pipes. In 1927 the choir organs were declared unplayable. In 1954 Steinmeyer restored both choir organs, based on the informations in Johann Ulrich Sponsel's Orgelhistorie (Nürnberg 1771, p. 129-134).Therefore - presumably against the finds within the instrument (insufficient space!) itself, a new stop  Fagott 16' and an additional rank in the mixture was added within the small choir organ. Records by the cantor Johann Lorenz Schneider of Lahm im Itzgrund in 1803, however, show that Sponsel was mistaken in some points. Further restorations will have to take those additional informations into account.