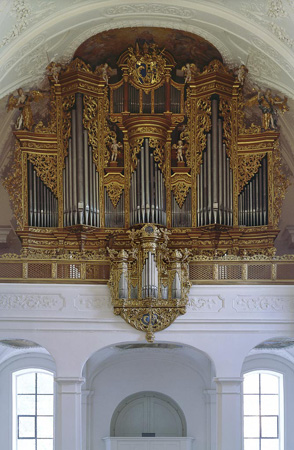 This organ was built after the termination in 1710 of the new abbey church, by the organ maker Johann Christoph Leo (in Switzerland he used the spelling „Leu“) from Augsburg. A major change occured during the before the organ was finished: at first only a set of bells was planned for the third manual, which was considered not suitable when tested. So it was replaced by a newly contracted „Flöthen Werckh“ on top which delayed the completion of the organ to late 1715.

The Rheinau organ is the biggest and one of the few extant organs by Leo who did not succeed against his competitors for the position of municipal organ maker in Augsburg, and then moved away. The Rheinau organ nonetheless shows Leo's abilities as a remarkable organ maker.