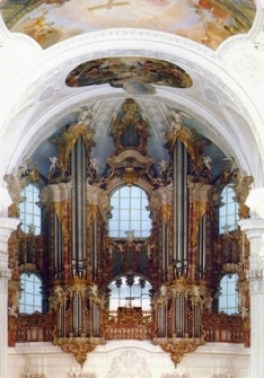 State of preservation: A considerable amount of pipes and technical structure preserved although several repairs and changes during the 19th and 20th centuries impeded original substance without solving certain weaknesses of Gabler's  work. Much admired  already in the 18th century it suffered from some flaws in Gabler's design.  When restored in 1980-83 by Kuhn (Männedorf) all later additions were removed, requiring the reconstruction of some stops to achieve Gabler's original design. 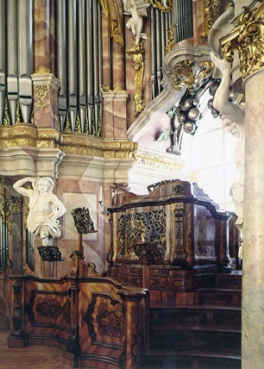 Gabler's organ is rightfully one of the most famous of the 18th century, its description by Dom Bedos de Celles made it will known all over Europe. Its size matches some of the biggest Dutch organs, the legend of its 6666 pipes in 66 stops (a metaphor for the scourging of Christ) gave it an almost mystical aura and its architecture grouped around the six windows made it a model for many following organs in a similar situation (eg Füssen; Irsee; Neresheim).

Gabler had to fight not only resistance from the abbey superiors but also gigantic technical problems, which he could not solve completely. Especially the stops of the crown positive suffered from insufficient wind supply via conducts of several meters length, and too close pipe positions impeding each other in force and sound quality. The spectacular detached console on a stage required a complex and rather heavy action leading to the later implementations of various technical "remedies" (like Barker levers) without definitely solving the problem.

Therefore the traditional Plenum of diapasons feels anything but sensational for players as well as listeners. The magnificent architecture does not match similar expectations of spectacular sound presence. The organ rather has a reserved character more like a chamber music instrument, despite many multiple rank stops and mixtures.  The proper peculiarity of the instrument is not in power but in its wealth and variety of an almost unlimited number of sound colours of all kinds including effects like the two sets of bells and bird calls. Especially the pedal bells visible above the console in the shape of hanging grapes ("Weingarten" vineyard) shows Gabler's intention not to spare any efforts for this wealth of sounds.