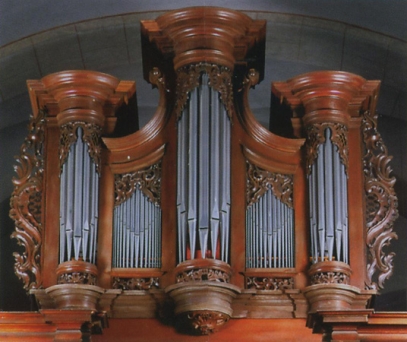 State of preservation: more than 40 % of the original pipes still existing. After severe changes in 1958 a restoration is planned.

This instrumente is an interesting example of a rather small western German organ inviting comparison with similar instruments from other regions. Compared to a southern German instrument the two reed stops are striking, themselves witnessing Stumm's idea to achieve the sound of a French "grand jeu" (by the Trompet 8') and a "Recit" (Cornett 4’ 4f.) as well as a typical reed solo  (Vox humana 8’) with rather restricted means. An organ maker further south might have preferred to avoid reeds altogether but would have added some attached pedal with a stopped 16'.The treble stop Querflöte 8’ shows Stumm's response to the common tendency for colour solo stops. An organ maker from central or northern Germany would have designed a Quintadena 8’ or even 16’ instead and an independent pedal to achieve "gravity." The reed stop Trompet would certainly have added "gravity" but not the Vox humana which further north would have been considered only for an instrument with two manuals.