The organ - an introduction

Musical instruments are a transition, a materialisation of a spiritual inner process. They are mediators from one inner world to another inner world. Through their materiality, they open an access to a world of the intangible. In them, we encounter a technical penetration of the immaterial, because through their sound, their harmonic structure, they open access to the most delicate that the soul holds.

Complex and elaborate instruments like the organ provide a glimpse into the deepest moments of interpersonal communication. The goal of these great instruments is to touch the soul, their goal in the ecclesiastical context is to lift hearts to the Lord. The organ masters this formidable task with a wealth of technical provisions that make it a living part of the Christian event of salvation.

This, at least, is the context of this instrument for many centuries. We know from antiquity that the hydraulos, an organ solving the problem of continuous wind flow by displacing water in corresponding wind cauldrons in the substructure was one of the phenomena of circus performances that beguiled the masses. This was a first successful step towards the mechanisation of a musical experience otherwise only possible with the use of a whole series of musicians. Mechanisation here not only increases the efficiency of the means to be used, but the effect of the sound event is enormously enhanced by its mastery by a single person. We know too little about the technical details of these instruments, but it may be enough to be amazed at the efficiency with which the problem of the continuous flow of wind is solved.

In the Christian West we encounter the organ again around the 8th century, now in a portable form as an instrument with bellows and sliders for controlling the notes. This instrument is ideally suited to accompany singing and as a means of giving orientation and direction. On a control unit, the wind chest, one or more pipes stand in rows, notes that are to sound together one after the other, tone sequences next to each other. Wind pressure is directed into the windchest via the bellows until a slider is opened, which opens the air stream for pipes standing one behind the other. Individually or, if arranged several times, a tone or a whole chord is now sounded.

The instrument has the exclusive task of arranging the singing of highly trained musicians and refining it with the long-lasting sound of the pipes. As far as we know, nothing was added to this wonderful sound event for more than five centuries. Instrument and musical idea had apparently become a perfect unity. It was not until the end of the 14th century that new musical ideas lead to new forms. Polyphony changed the space of musical sensations, and the organ, which has become an idea at rest in itself, encountered a new challenge. Preserving the spirituality but opening it up to the new power of polyphonic music succeeds at the end of the 14th century.

Previously, sliders had opened the successive tone sequences, but these were now replaced by small wooden leather parts on keys that acted as valves and obeyed the pressure of the fingers, allowing polyphony. The spiritual effect may have been so inspiring that instruments grew in size considerably. However, the larger the pipes became, the more ergonomic playing was restricted. The valves, which were further apart, especially in the bass range, required an approximation to an even spacing of keys. Rotating wooden slats with an arm at each end were the solution to this technical problem. With this efficient lever arrangement, the control of the valve could be placed almost anywhere. Key spacing was evenly distributed across the keyboard, the ergonomics of expressive playing made possible by these levers. The idea of the instrument mechanised by a steady flow of air with enormous spiritual radiance and power could now unfold new effects. 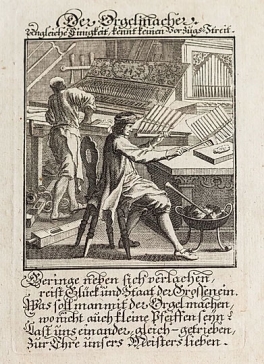 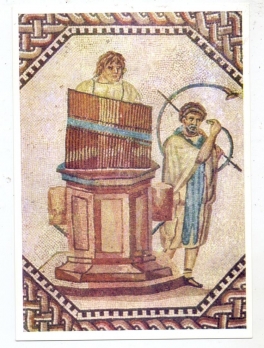