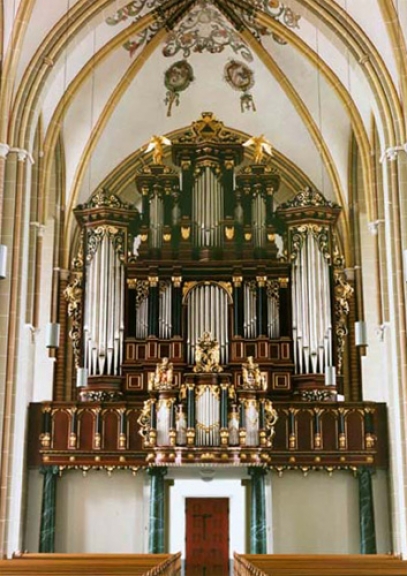 State of preservation: Only a few cases and  hardly any untouched instruments are preserved of the about 70 known works of the Bader family.  In 1815 Timpe modernised the Bader organ with great care and reluctance keeping the former substance largely untouched, thus leaving an impression of the high quality of 17th organ making.

The organ makers' dynasty Bader is a model case for organ traditions crossing political, religious and temporary borders.
Daniel Bader (um 1570–nach 1636) of unknown heritage arrived in Antverp via Cologne in 1600 to enter the guild not only as organ but also as harpsichord maker. In 1607 he returned with his family to Germany and predominantly worked around Münster. Four of his sons also became organ makers: Hans Henrich (a1600–1680 or 1681), Arnold (1601–1656 or 1657), Tobias (I) (a1615–1666 or 1667) and Ernst (active 1626 to 1637).
Hans Henrich worked in Münster at first, in the 1640s in Arnhem and Zutphen and afterwards in the Paderborn region. Arnold went from Münster via Zutphen to Frisia, his brother Tobias followed him.
The third (with 3 organ makers) and fourth (two organ makers) generations were descendants of Hans Henrich Bader and were active up to the mid 18th century while moving from Brabant to Belgium, thus heavily  influencing organ culture from Westphalia to the Low Countries.

Hans Henrich Bader was contracted in 1637  to renew the organ by Hans Graurock built in 1533-34, at first by new Rugwerk.  Two years later a contract followed to adapt the rest to the new Rugwerk, completed in 1643 with the cooperation of his brothers Arnold and Tobias.
The organ remained unchanged more or less, until 1813–15 when Johan Wilhelm Timpe of Groningen moved it from its old place on the side to the choir. Timpe added a Bovenwerk but kept Bader's work largely untouched. Some further changes in the 19th and 20th centuries were of minor impact and relevance.