The organ building between the central hill ranges in the north and the language borders in the south, west and east is as diverse as the political conditions of the time before 1800. The proverbial multitude of small states of that time led to a fragmentation, which often manifested itself in the fact that in Swabia or Franconia, for example, the regency changed from one village to the next and often the religious confession with it. Embedded in this mixture lay Free Imperial Cities, which under state law as well as according to their own self-understanding were only subject to the emperor himself, some of great cultural importance and proverbial economic power, such as Frankfurt, Nuremberg, Augsburg or Heilbronn, but also such curious state structures as the "imperial villages" Altdorf (near Ravensburg) or Gochsheim (near Schweinfurt). Numerous were also the ecclesiastical territories with a bishop or abbot of a monastery as both secular and spiritual sovereign. The only larger states were Bavaria and especially Austria, which also held many smaller disjointed territories in today’s southern Germany. This reveals one of the external causes of a great variety of organ buildings in the German-speaking south.

These regional organ styles were usually less defined by the political borders of that time than the (over the centuries much more stable) diocese borders. For example, in the old Prince-Bishopric of Mainz, an organ building tradition with specific characteristics was formed, as well as a Franconian style in the Prince-Bishopric of Würzburg, a specifically Upper Swabian style in the area of the dioceses of Constance and Augsburg or an Old Bavarian style in the dioceses of Freising, Regensburg, Passau and Salzburg. These phenomena overlapped with other areas such as Old Austria, which at that time included Bohemia and Silesia.

The organs in the dioceses within the Alps, such as Brixen and Chur, turn out to be closely connected to those of the neighbouring ones north of Lake Constance, which extended well beyond the present political borders into the Alps. Along the Rhine, an associated style region developed both west of it in Alsace and east of it in Further Austria and Baden, itself showing its proximity to France.

The differences between these many smaller organ building landscapes are shown in details of the façade designs, the preference for certain ranks, the construction of parapet positives or not, or the design of special tone colours. Some enormously advanced experiments with free-standing organ consoles and other constructions with immense technical effort often meet some very old patterns, such as the frequent insistence on short octaves in the bass.

But in the same way there are some more or less common elements in all landscapes, which give the South German baroque organ a special character: a certain elegance, but also extravagance, and individuality of the instruments and their builders and a preference for organs with diverse sound palettes even with very small instruments. The musical orientation to improvisation but also to the accompaniment of congregational singing as well as orchestra and choir promoted this even more, because all these diverse requirements were often met with organs with perhaps only 10 or 15 stops. Southern Germany like hardly any other organ landscape is determined by instruments that would have been considered small elsewhere, with one manual and often attached pedal, which had at most a single 16' stop. But in these instruments, each rank required some particular character and was to be usable both as solo stop and in all conceivable combinations with other registers - a special challenge for the organ builders, which were driven by the search for the unusual and worthy of imitation. Many organ builders of that time seem to have been almost passionate cross-border commuters, who transplanted stylistic elements from here to there, visited each other, surveyed, copied. The incorporation of Italian or French style elements and their amalgamation with their own special features is a hallmark of some even then spectacular organ building projects, such as the organ of Salzburg Cathedral or the organ of the Augsburg Barfüßerkirche.

These and some other major organ-building projects of that era also stand out from their own stylistic environment. Surviving instruments such as the organs in Weingarten or Zwettl or the Ottobeuren choir organs combine a manifestation of the unique and distinctive, sometimes even the seemingly technically impossible. This raises them not only for themselves, but also against the background of the entire organ history as astonishing testimonies of the imagination, but also of the craftsmanship of their builders. 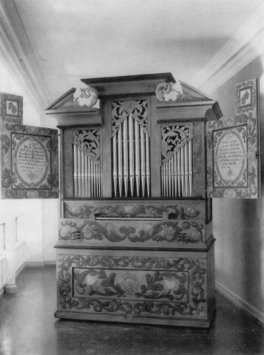 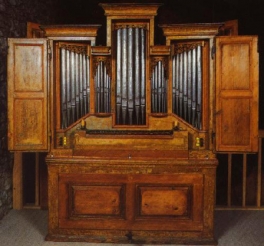 Small organs could serve a variety of purposes, for example as basso continuo instruments or (portable) processional organs. In some regions of Europe, however, independent small organ types developed for use in private houses, particularly the Netherlands and Central Switzerland, both with a reformed population majority. There the organ played only a minor role in the ecclesiastical liturgy, sometimes not at all, true to the negative attitude of the reformers Zwingli and Calvin towards the "devil’s bagpipe". In affluent bourgeois and peasant houses, however, a house organ was considered an attractive symbol of status and was valued highly as an accompanying instrument for domestic devotion, but also as a keyboard instrument as such and a general bass instrument for ensemble music.

Characteristics of such house organs were the reduction of high pipe ranks, but multiple 8' ranks to offer some variety for accompanying purposes. These instruments usually have  only one manual and between three and six, rarely up to ten ranks.  They usually measure a height and width of about two and a depth of about one and a half meters for use in living rooms, but also in schools.

The Inner-Swiss House Organ can be arranged in two major groups according to design and the region of origin (especially Sankt Gallen/Toggenburg, Bern/Emmental, a few also from the cantons of Appenzell, Zurich and others) The Toggenburg form of Swiss house organ has the pipe feet standing on a horizontal plane and the labia forming a continuous line. The upper edge of the organ is therefore inevitably unequal (due to the different pipe lengths) and is designed in the architectural styles of the church organ (pediments and the like). The cases often have hinged doors and are usually painted. The organist’s music stand stands in front of the middle pipes and partially covers them. The Emmental house organ, on the other hand, has a large and relatively simple cabinet shape with a continuous top edge, the different lengths of the front pipes equalised by placing the pipe feet on oblique boards, the deepest pipes outside, the higher ones in the middle. Since the middle pipes so stood in some distance above the keyboard, the music stand could often be mounted without covering the pipes.