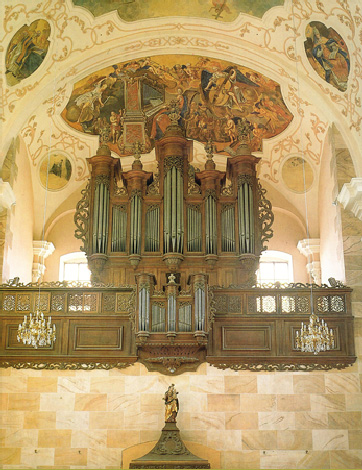 State of preservation: Largely original, only the stop Bombarde 16’ later (built either in 1812 by Joseph Bergöntzel or in 1857/58 by Martin Wetzel). Restoration in 1997-98 by Gaston Kern.

The Ebersmünster organ is one of the most important instruments Andreas Silbermann has built east and west of the Rhine. Its outward appearance as well as specification are characteristic for a French organ of its time, a few features in specific manufacture of certain stops (wide-scaled diapasons) or the separation of HW and P by an inner wall reveal Silbermann's traditions. But in contrast to saxon Silbermann instruments the Pédale functions as a mere bass division.