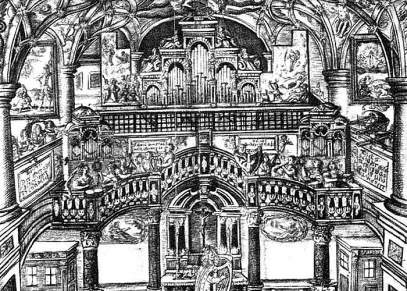 Although the organ of the Dresden court chapel does no longer exist, it deserved special attention for its great importance for music history and organ making in the 17th century: Not only an important part of one of the central churches of Lutheranism it also was a focus of church music of court composers and chapel masters Haßler, Praetorius and Heinrich Schütz (1585–1672).

The court chapel of the Dresden residence was finished in 1551–1554 (or 1555) vollendet. Its appearance was Renaissance throughout and served as a model for other Lutheran churches.

The organ was planned by the chamber organist Hans Leo Haßler (1564–1612) and built by Gottfried Fritzsche (1578–1638) who became one of the most important organ makers of the 17th century and shaped Saxon and northern German organ history to a great extent. Fritzsche later moved to Ottensen near Hamburg where he reshaped almost all organs of the major churches.

The Dresden organ was probably contracted in late 1610 and maybe finished in late 1612, or 1614 as given by Michael Praetorius who was court chapel master 1613–1616 living in Dresden and being in close contact to Fritzsche.
1627–1628 Fritzsche repaired the organ again following Schütz' wishes, and added four unknown stops "after Dutch manner." Afterwards only some minor repairs were documented before the organ was removed in 1737 because the court chapel was renovated into living rooms. The organ maker Johann Ernst Hähnel moved the instrument to the Matthäuskirche in Dresden-Friedrichstadt where it was replaced in 1861 by a new organ. Some parts of the case in storage were finally destroyed in 1945.