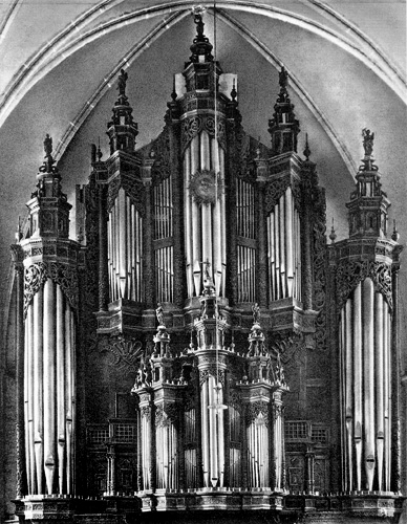 State of preservation: Restored in 1994 and 2019 by Orgelbau Alexander Schuke

The Tangermünde organ marks a last climax of of Renaissance organ tradition before the horrors and devastations of the 30 years' war.  The main organ shows a rather archaic form: the fundaments stops are present twice, as an open and a stopped rank; above 4’  all ranks are joined in the traditional Blockwerk split in two (Mixtur and Scharf). The parapet positve has already two different stopped ranks of equal height and a separate fifths stop; the top positive has almost no principal ranks and is designed as a solo keyboard of northern German style. The melody stop "Zincke," one of the most popular solo stops before the 30 years' war and very rare afterwards, is still present (also as "Cornettenbaß" 2' in the pedal). Scherer of Hamburg built one of the significant organ cases in the design that his family and the Fritzsche family made a typical example of the Northern German style.