State of preservation: Most pipes, case by Jacob van Campen including the wings by Jan van Bronckhorst 1655. Modifications 1838-40 and 1912. Restoration by Lambert Erné and Cor Edskens in 1969-1981.

This organ was claimed (after the expansion by van Hagerbeer and Duyschot) the biggest of its time in the Netherlands. Unusually the pedal towers are placed besides the positive. Also very unusual ist the multiple ranking of almost all manual stops preventing frequent retuning and allowing an almost complete reconstruction of the 17th century specification since during the 19th modifications many old pipes were only repositioned within the organ to gain additional stops.

The organ of Amsterdam Nieuwe Kerk is one of most remarkable examples of Dutch organ making in the "Golden Age.". Case decoration as well as the multiple ranking may seem extravagant but these uncommon features had a major part in the preservation of the instrument. 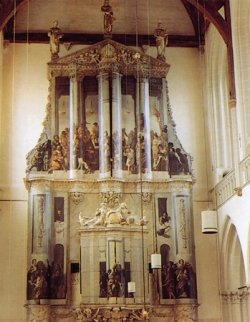 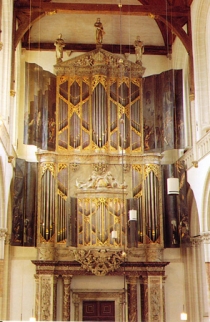