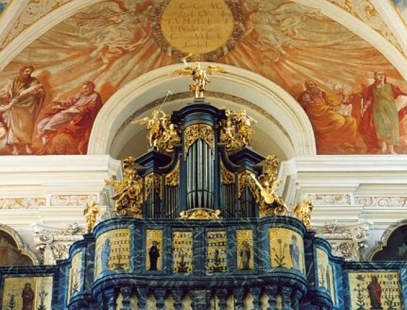 A comparison with the organ in Schweidnitz of an equally unknown maker at about the same time shows the basic differences between organs and organ use in either protestant or catholic churches in the late 17th century. While a  "Lutheran" organ demanded a division of stops in two manuals and pedal to allow, besides acompaniment of congregational singing, playing organ trios, a "catholic" organ  primarily used for improvised pre- and postludes should offer a multitude of contrasting sound colours for different liturgical requirements. So it made sense, like in this example, to keep the number of manuals down but to offer three 8' stops of flute, diapason and string character in a manual of just seven stops.