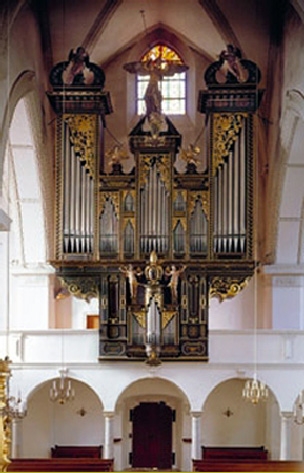 The Schlägl organ demonstrates the transition to baroque sound ideas in a case still showing Renaissance structures.  Its history is very erratic though, many repairs following numerous fire damages were needed to get the instrument back to action again, rather than incorporating the newest fashions, but during the 19th century the historic substace deteriorated more and more.

Initially the instrument had been planned for a rood screen and therefore had two façades but the screen was removed in 1626 and the organ transfered to the western gallery. Originally it possessed a second positive division, probably a chest positive, demolished after another fire in 1805 to repair the other divisions with its pipes.