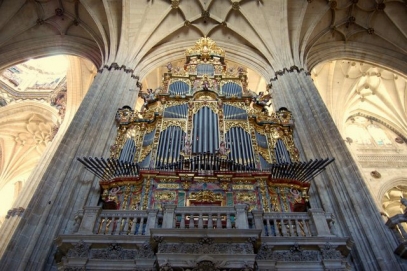 The Capilla Mayor of Salamanca, Catedral Nueva is one of the most beautiful examples of Spanish baroque. Its Gospel organ was built by the maybe most important organ maker of Spain during that era, Pedro Echevarría, in royal service from 1724 until his death in 1771, like his father Liborna Echevarría before him.

Echevarría's Gospel organ above the choir stalls opposes an older Renaissance Epistle organ. Its height of 21 meters and width of 13.5 meters impresses even today. The lower division is a swell.