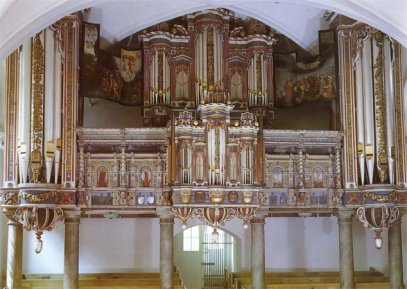 State of preservation: After a period of decay Paul Schmidt of Rostock removed the third manual and numerous pipes in 1755; minor repairs 1798 and during the 19th c.; restored in 1983 (3rd manual, missing pipes, new metal sheets on front pipes) by Schuke-Orgelbau 1983.

To reduce costs all metal pipes were made of "metal" with low content of tin. The front pipes were plated with tinfoil to give them a bright appearance.

The Basedow organ has been largely preserved by poverty. The need to keep costs low existed already while the organ was built, and later preserved the instrument from being radically modernised. At its time it represented what was considered the indispensable minimum for Lutheran liturgy; further south in catholic areas an organ of that size would have been considered worthy for a cathedral or wealthy abbey.

Its destination for playing Lutheran chorales is clearly visible in its specification, as well as the localisation in rural Mark Brandenburg. The extremely high pedal stops Baurfleute 1’ and Cornettbas 2’ are meant for playing a slow chorale melody in treble range; similar stops are also found in other northern and central german organs of the time. Also typical though are certain stops influenced from Silesian organs like the single thirds stops in the manuals. The deep fundament stops Quintadena in the manuals and the 16' reeds in the pedal reveal proximity of the traditions of the Hanse towns Hamburg and Lübeck.