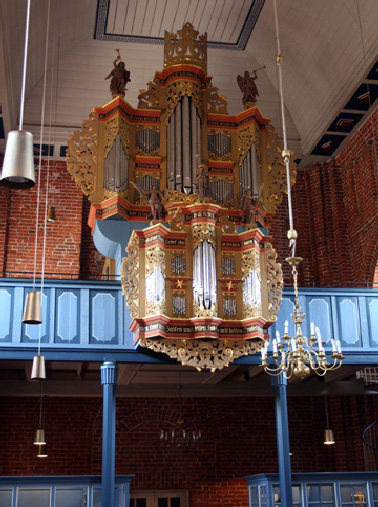 Gerhard von Holy of Esens, a presumed pupil of Arp Schnitger, built a new organ in Marienhafe in 1713. The ornaments were carved by Johannes Bildschneider of Esens.  Some minor repairs and alterations were made by Johann Adam Berner of Jever in 1761 and in 1781 and 1797 by Johann Friedrich Wenthin of Emden, In 1824, the eastern part of the church almost collapsed, the instrument was rescued and after several years of storage was reerected without any changes in the western part of the church by Johann Gottfried Rohls of Esens in 1831. In 1886 Johann Diepenbrock of Norden replaced Quintadena 16’ by a Bordun 16’, an obviously later repair was the replacement of the original Trompete 8’ by a new one; a first restoration took place in 1966 by Jürgen Ahrend who had to replace parts of the wind chests and reconstructed the two lost stops. After building works in the church he also cleaned and repaired the instrument again and tuned the instrument in a modified mean tone temperament.