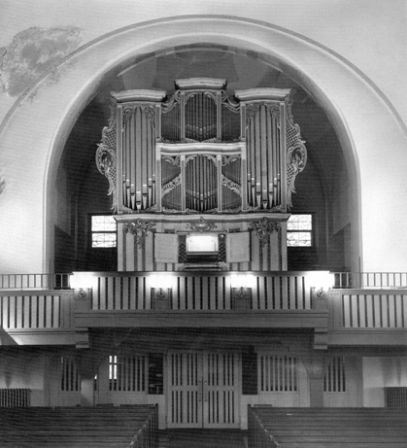 State of preservation: Still preserved are: a majority of pipes (although with renewed  languids!), wind chests, manual coupler and pedal tracker action.
This instrument has benn the first of several domestic organs of princess Anna Amalia of Prussia; Carl Philipp Emanuel Bach composed his organ sonatas Wq 70 for her (and this instrument). Built for her rooms in the Berlin castle the instrument was transfered  to the Palais Unter den Linden 7  in 1767, then 1788 to Schloßkirche Buch; in 1939 put in storage. In 1960 reerected in Karlshorst.

The organ of the music-loving princess Anna Amalia was an unusually big instrument as a domestic organ. An instrument with two manuals and pedal and 21 stops needed a room of considerable size hardly available in a bourgeois or noble estate.

Another peculiarity is the composition of specific organ works for it. Carl Philipp Emanuel Bach composed his „Preludio e sei Sonate per l’Organo“ Wq 70 in the years 1755-58. Bach noted on the title of sonata 6 the collection had been composed 'for a princess who could not play pedals and any difficult passages, although she loved playing her organ with two manuals and pedal.'

Bachs sonatas are rather untypical in comparison to organ works by his predecessors, not only as a sign of paying respect; they are, however, close in style to his usual keyboard works.  Although this organ, matching its size, is placed in a church now, it represents an important tradition of organ use outside the church.