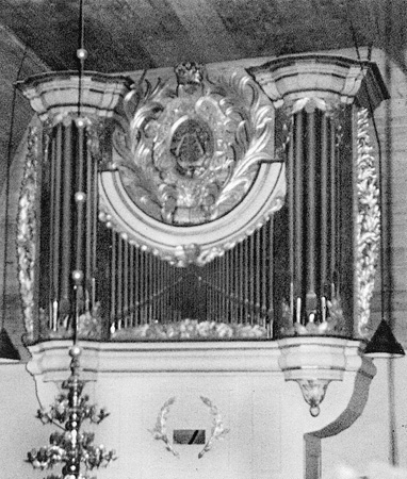 State of preservation: Case, most pipes and organ technics original.

The organ was built as an interim for Uppsala cathedral and was transfered to Tjällmo church in 1739. It went into storage in the 20th century when a new organ was built, and was restored in 1967-69.

The Tjällmo organ had a chequered fate. Built as a temporary solution it was treated as such for a long time. it has been a series of lucky events and good craftsmanship of the instrument to keep it for posterity. When the instrument was to be finally removed in the early 20th century the organ was hollowed out to include a new instrument in the old case. But contrary to usual procedure the old instrument was kept in storage for any further use in whatever future. And as it happened the modern instrument with all its new technical achievements and refinements proved to be far less durable than its centuries old worn predecessor which was recognised after a few decades as an important historical monument.

The instrument resembles a common type of small organ with one manual without pedal (its attached pedal of a later date) of universal use but naturally reduced options for organ works of Buxtehude or Bach usually requiring an instrument of two manual and independent pedal.

A particular element of the instrument is the technical setup with three split upper keys per octave showing the preference for mean tone temperament even with the growing needs of using more remote tonalities.