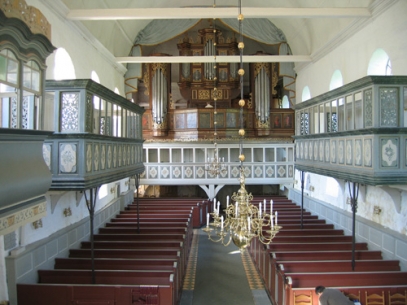 State of preservation: majority original. One stop by Georg Wilhelm Wilhelmy 1775, another lost in 1909 and restored in 1947/48 and 1987 by Rudolf von Beckerath.

Arp Schnitger, living in Steinkirchen, built a new organ using old ranks as usual whenever possible. The old substance of the  stop Rohr Flöt shows the usual compass of F to a2 of Dirck Hoyer's organ. Hoyer already had used older pipes obviously because the ranks Octav 4’ and 2’ (HW) appear to have been made in the early 16th or even 15th century. So this organ represents almost half a millenium of organ history.
The organ case shows the idea of the „Hamburger Prospekt“ in quite an unexpected way. The pedal towers stand free and integrated into the parapet in some distance to the main organ containing both manual divisions atop of each other. This extraordinarily benefits sound expansion, in particular of the pedal with a series of high melody stops. This supports organ trio playing as well as the Lutheran organ chorale with a slow melody line in the pedal. It thus witnesses the close link between organ architecture and musical structure.