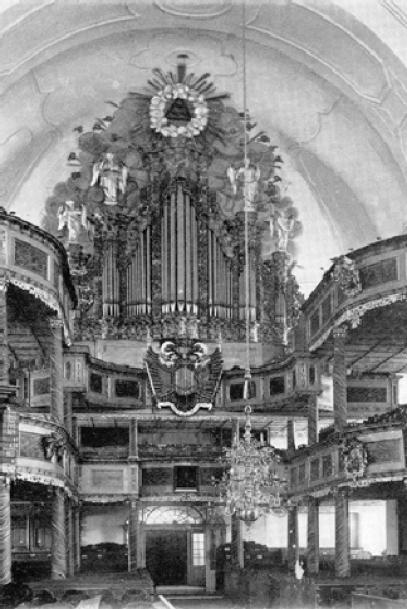 State of preservation:  Since 1905 the case contained an organ by W. Sauer which was transfered after 1945 to Warsaw (Katedra Polowa Najświętszej Marii Panny Królowej Polski) though without the parapet positive.

The instrument represented a climax in Silesian baroque organ making and explicitly cited the political power behind it, Silesia then being part of the Bohemian crown and thus the Habsburg monarchy present in the double headed eagle forming the parapet organ. Thus Silesia is part of the counter reformation baroque flourishing in southern Germany and Austria as well as Bohemia spreading the new style of art, (even shining bright in a protestant church).

It was also a monument of Silesian organ culture in sound and technical respect. Menzel arranged his instrument to be played in choir as well as in chamber pitch, a familiar practice in Silesia but rare otherwise. This requirement, necessary for the organ being played with orchestra, only concerned a few select stops for accompaniment purposes. Menzel realised both available technical options, special stops in chamber pitch in the pedal and a transposable keyboard in the chest positive.