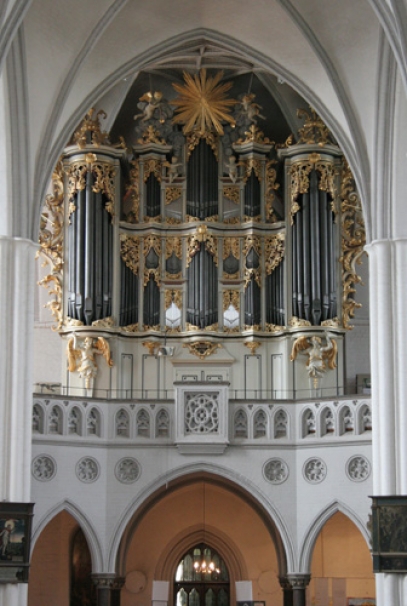 The Wagner organ of Berlin St. Marien suffered a varied but, in many ways, typical fate of a big 18th century organ particularly in a city of the size and importance like Berlin. A parish which could afford building a representive organ of 40 stops often could also afford the dubious "blessings" of progress to be added in later times. Wagner*s organ is one of the best examples, with the various changes of being "simplified" following the recommendations based on the latest, but only partly understood achievements in acoustics by Abbé Vogler, followed by "romanticizing" the instrument in the 19th century, then massive war damage in 1945, and various stages of reshaping baroque ideas in several stages following different authorities and sound ideas.

"Simplifying" after Vogler eg tried to achieve certain low ranges by difference and combination tones, a concept working in theory but with numerous complications in practice and the resultants not well audible by many listeners. In addition everything considered unnecessary by Vogler and his followers was removed - resulting here in the loss of about 60 % of all pipes, particulary high harmonics, the organ reduced to 26 stops in total.  The organ then was particularly well suited for playing Vogler's then widely admired organ compositions - but hardly for anything else.

The next wave of "improvements" followed soon after: the romantic organ styles demanded further additions of fundament ranks (16’ and 8’) and a dynamic progression at further expense of high ranks and 18th c. reed stops, already reduced to make room for Voglers' additions of fifths 102/3’ or 51/3’The first attempt, a bulk of different 16’- and 8’ ranks permitted dynamic shading from hardly perceivable pianissimo to thundering fortissimo so seemingly suitable for the works of Liszt or Reger, but no longer for a baroque chorale prelude on two manuals of approximately same volume.

The first attempts of organ movements following the „Elsässer Orgelreform“ or the „Orgelbewegung“oft overdid a swing-back. Based on assumptions about the model importance of Schnitger for an "ideal" baroque organ for playing Bach's organ works often baroque stops not matching Schnitger's were removed to allow additional high harmonics, the wind pressures and pipe intonations were altered asf. Only when special characteristics of certain organ makers and landscapes were further investigated the individual features of specific instruments - if ever possible - could be reconstructed.