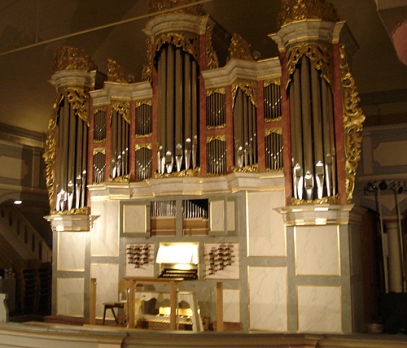 State of preservation: The organ in Gifhorn is the best-preserved instrument of  Christian Vater of Hanover. By lucky coincidences numerous planned renovations in the 19th and 2oth century were of little consequence.

In 1748 the new Nicolaikirche received an organ by Christian Vater who used some materials of a previous organ. The instrument was largely undisturbed until 1872 when it was tried to retune the organ (previous pitch about ¼ tone higher than a1 = 440 Hz) with no success. Several attempts for a complete renewal of the organ took place in 1904, 1916 and 1918 but failed due to high prices and the consequences of the world war. A threat of requisitioning the front pipes could be avoided when the organ was registered a monument in 1932. Nonetheless Furtwängler & Hammer replaced the stop Vox humana by a Dulzian-Fagott 16’ in 1935. In 1947 and 1958 further attempts for a lower retuning failed again.
In 1961 Flentrop of Zandaam did a major repair; when the organ was transfered to the lower gallery for that, it nearly crashed. The damages of this misery could only be fixed in a superficial manner. Therefore in the years 1996 to 2000 a major restoration by Gebr. Hillebrand of Altwarmbüchen near Hannover was necessary.