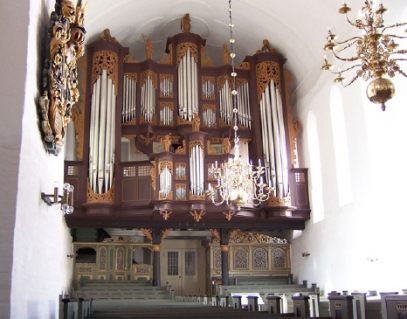 In spite of various repairs the substance of the instrument is largely intact. It is one of the most precious sound documents of the late 17th century,  not the least by its size and the original reed stops. Vincent Lübeck was its first organist.

When this organ was built in 1675  by Behrendt Huß in Ss. Cosmae et Damiani in Stade, the young Arp Schnitger worked with Huß as his journeyman. Even before the organ was finished Vincent Lübeck was contracted as organist. After Huß' death Schnitger finished his instrument in neighbouring St. Wilhadi in 1676 and achieved wide reputation. In 1688 Schnitger, together with Vincent Lübeck, altered the organ in adding three reeds and the Cimbel stop..

Over the centuries numerous changes of case and sounds occured: In 1781 Georg Wilhelm Wilhelmi changed the pedal towers to gain space on the gallery for church music. In1870 the organ was retuned by Johann Hinrich Rover from the original choir pitch about two semitones above to „modern orchestra pitch" and tuned in equal temperament. Because of another resizing of the gallery the parapet positive was placed behind the organ and thus the now hidden front pipes evaded being requisitioned in 1917.

A first restoration by Paul Ott 1948 put the parapet positive back into the front. In 1956 the short octaves of manuals and pedal were abolished. When the organ finally failed after the numerous changes and alterations it was restored to the state of 1688 in 1972-1975 by Jürgen Ahrend (Leer-Loga).